From 14 to 16 June 2015, the conference “Austria Connect CIS 2.0” was held in Moscow. This event, which was the second such conference of Austrian managers and investors in Russia, saw over 200 participants and speakers discuss prospects for and perspectives on the Russian economy, this economy’s influence on other CIS countries, and the important role that the vast economic area of the Eurasian Economic Union can play for Austrian companies.

This conference was attended primarily by managers of Austrian companies and entrepreneurs with investments in or working relationships with countries of the Russian Federation or the Eurasian Union, and they were joined by representatives of Russian companies. Highly interesting lectures and panel discussions as well as very well-attended master classes made the overall event a true highlight.

As in the previous year, PROMTECH Group was represented by its CEO Vadim Barakov, who also actively participated as a lecturer. His talk, “EAC in practice”, explained specific distinctive features such as import rules, standards, technical regulations, certifications, and common certification (EAC) that have characterized the Eurasian Economic Union for Russia, Kazakhstan, Belarus, Armenia, and Kirgizstan since 1 January 2015. Furthermore, he also introduced valuable information regarding technical regulations recently signed into law.

This major conference provided the opportunity for managers and companies to make important new business contacts and/or strengthen existing relationships with existing clients and business partners – a central concern in light of the fact that Europe’s current restrictions with regard to these regions make new strategies and networking especially important.

We extend our thanks to the organizers and all participants for an interesting conference, which offered opportunities for diverse forms of exchange, and we look forward to further prosperous cooperation in the future. 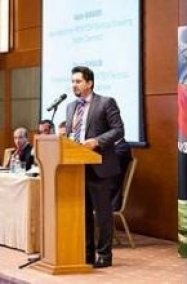